STARTING WITH THE LETTER “S” 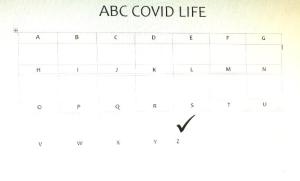 While we have been seeing quite a few feature length films lately for various Zoom discussions, sometimes we are just in the mood for a quick film input. Say hello to “short films” or “shorts!” Barbara has long been a fan of short stories and over the last three years she’s come to love short films and goes to the showing of Oscar-nominated shorts every year. Laura has been curious about this medium for some time, and so we decided Short Films would be a great item for the letter S.

We viewed three films this week, but there is no shortage of films to choose from on the various streaming services. Our views merged on one and differed on two, which made for good discussion.

“My Mom and the Girl” was the film we agreed on. It did its job in showing how difficult it is for the caregiver and family of someone with Alzheimer’s. The characters were all likeable and we spent some time talking about the pros and cons of staying at home vs. living at a facility on both parties.

Next up was “The Critic.” This film shows you a glimpse of what it is like to be interviewed by someone who is extremely intrusive and who constantly turns your words around. Plus, it portrays a woman who pulled herself out of drugs to become an award-winning actress but yet is still very fragile. Or…did that really happen? Barbara loved this film because it ended with so many questions, which is one of the things she believes makes a good short. Laura felt anger at the interviewer and let her disgust with people who bully others with their words and attitudes interfere with her appreciation of this short film.

Last was “The Fish Out of Water,” which was the short about which we disagreed the most. It focuses on a young man who spends his day at a dull job, imagining all the things he wants to do if he had the courage. Barbara really disliked the film. She felt it was too linear and she didn’t feel anything for the main character. On the other hand, while Laura admitted that the film’s message was quite obvious, she enjoyed how they visually brought to life the main character’s daydreaming fantasies and she empathized with the universal dilemma of not allowing yourself to take chances in life.

We are going to continue watching shorts. Maybe we’ll select the ones that have been nominated each year and maybe we’ll spread out into short documentaries – will that be our D? A word of advice: If you only like films/books that have everything wrapped up neatly at the end, then shorts may not be for you – but it’s definitely worth giving them a try.

Watch some and channel your inner film critic. Let us know your review!