TASTINGS AND HAIL TO KALE

When there’s not much to do, there’s always food! So we decided to do some TASTINGS today. First up were varieties of pears: Anjou, Bartlett and Korean. The Bartlett was ripe and juicy and just plain delicious. The Anjou wasn’t quite ripe enough but a little bland in any case. The Korean pear was just awful (watching Barbara spit it into the trash was not a pretty picture).

Next up was the apple. We picked three we hadn’t tasted: Jazz, Pink Lady and Kanzi. The only one we semi liked was Pink Lady, but the other two just weren’t up to par; maybe they’d be better used in baking?

We’ve been a little intimidated of KALE and wanted to see what all the fuss was about on this little, leafy gal. Since Barbara’s daughter-in-law is a big kale enthusiast, we asked for a recipe. The Kale Sausage Soup recipe was a WINNER! The only thing disappointing was that it did not involve massaging the kale. The kale leaves were very upset since they were anticipating a relaxing massage, a little soft music, etc. and instead found a hot pot of broth. We promise to treat them better next time (although we actually think spinach would have worked just as well…ssh, don’t tell the kale).

Our weekly bread was an orange chocolate brioche from our BreadEx delivery. We’re going to use it in a French toast tomorrow and Barbara will see how it compares to her challah banana pecan French toast. 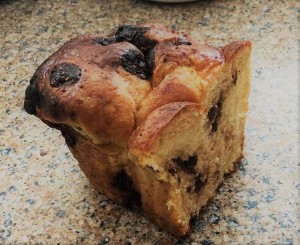