CHECKING OFF “Z” WITH ZUCCHINI

What do you do when you have a zucchini overload? Well, you say hello and then eat them! In a recent InstaCart order, Laura selected one zucchini and was amazed to receive five, including one rather oversized one. (The world’s largest zucchini on record is 69 ½ inches long, weighing in at 65 lbs. Fortunately, Laura’s was nowhere near that size.) Rather than have the zucchinis hang out in the refrigerator getting to know each other, she decided to share with Barbara and then they, naturally, had to find new recipes in which to use them.

Laura chose to make a Weight Watchers recipe,” Mexican Chicken with Zucchini, Corn and Black Beans.” True, the zucchini (or “zucchinia” as one zucchini is actually called) was just one component of this meal but a great way to use it. The dish was quite tasty and was added to the “tried and true” recipe binder. 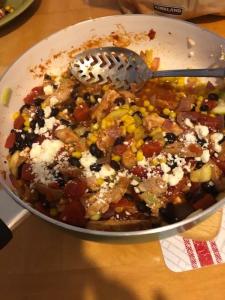 Barbara also chose a Weight Watchers recipe, this one for Zucchini Pancakes. Once she got over the way they looked as they were cooking and told her taste buds to think of it as eating thin zucchini bread instead of pancakes, they weren’t half bad. All in all a pretty decent zucchini experience.

Let us know if you’ve tried any spectacular zucchini recipes and we’ll try them!

2 Responses to CHECKING OFF “Z” WITH ZUCCHINI