Posted on September 8, 2018 by abcsisters

September is getting off to a Rocky start. 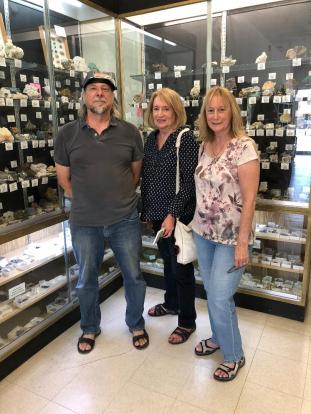 Over the years, each of us had “casually” collected various things – from Barbara’s vintage hats to Laura’s wood, ceramic and sculptured ducks. Collecting is fun – and a great reason to scour garage sales and antique shops. But rocks were never on our radar until now. With vague memories of our kids expressing interest in rock collecting years ago, we set out to discover both the lure and the lore of rock collecting. We hit the mother lode at Nature’s Gallery in Carrollton. This little gem was chock full of rocks and minerals of all shapes and sizes. Owner Donald Slater emerged from his workshop, rocking his polishing gear, and was so helpful in explaining the basics of rock collecting. Frankly, we’ve never met someone quite so passionate about his vocation. An avid collector since childhood, he travels all over the United States and internationally in his quest to find rocks. To our rookie eyes, his shop had something to appeal to every collector and yes, we caught a little of the rock and gem fever ourselves. Laura bought a few that spoke to her because of their shapes and color and Barbara bought two pieces called crazy lace that she can wear as pendants. We each ordered a beginner’s rock and mineral guidebook to help us continue our rock hound tendencies and are contemplating attending an upcoming Dallas trade show. We don’t know how long this ROCK FEVER will last – but for now we are looking down as we walk!

ROCKING the RAIN AWAY 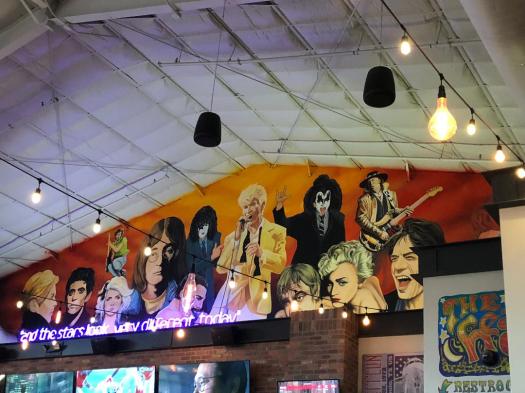 There’s not much to do on a rainy day so why not take a walk down memory lane? We thought we’d try ROCK & BREWS, a rock and roll, comfort food restaurant. If “what you see is what you get”, our vision was a bit off. Rather than being surrounded by 50s/60s music and Jimi Hendrix-type paraphernalia, we stepped into a huge, modern sports pub. Although there were some rock and roll videos and posters and rock music playing, the football games on the dozens of big screen TVs were taking center stage and the acoustics were such that you couldn’t hear the music. Good Golly Miss Molly, we missed the tunes.

On the plus side, the food was pretty terrific and the Purple Rain Drops (mini beignets filled with melted chocolate and topped with whipped cream and raspberry sauce) hit just the right chords.