Our situation has improved a bit but we are still not able to do as many outings as we would like. But we’ve kept busy, mostly pursuits that we can do from home. So let’s DELVE into our DOINGS.

I chose to watch Ordinary People to cover the theme of Depression. However, it more aptly fits the topic of Dysfunctional families and Denial. This Oscar winning film (1980’s Best Picture, Best Director (Robert Redford), Adapted Screenplay and Supporting Actor (Timothy Hutton) carries you through the disintegration of an upper middle class family who has lost their oldest son to a boating accident and then subsequently experienced the tragedy of their younger son’s attempt at suicide.  I didn’t much care for the film, although the acting and directing were first class. It was tedious and distant, but then again the subject matter was not designed to entertain or uplift. What I took away from the film, however, was that when you can achieve emotional honesty, you definitely better the odds of working through serious problems. Sadly only the father and son made progress, whereas the mother chose to just leave the family rather than confront her demons.

Virgin Suicides, while perhaps not about the theme of Depression, certainly left me extremely depressed. I think it is more about repression than depression. Starring James Wood and Kathleen Turner as very religious and strict parents of 5 daughters, all of whom eventually commit suicide (that’s not a spoiler), it confirmed my personal belief that not allowing a child to go through the normal behavioral stages does not bode well for their mental health. I know that the parents cannot always be blamed for their children’s behavior but in this case they certainly were the largest factor. It’s sad, though, that the feeling among the sisters for each other did not allow them to hold on until they could leave that household.

Having seen some depressing films, we wanted to balance out our feelings with some sweet and DELICOUS DESSERTS. We chose two of our favorites: cupcakes and donuts.  First place was WOW! Donuts and Drips in Plano. There were four categories of donuts: Classics, Fancy, Gourmet and Boutique.

We skipped over the Classics and went for the more enticing choices. Our choices were Orange Creamsicle (Fancy), Biscoff (Gourmet) and Key Lime Mousse (Boutique). These were about the tastiest donuts we’ve ever had. First, each donut was made to order. Second, the “donut” itself was delicious: not too sweet, yet not too bland – the perfect platform for added toppings. And third, the flavors, design and overall blending was unmatched by any of the other donut shops we’ve been to (and we’ve been to a lot). Our favorite was Orange Creamsicle!

Cupcakes were next. We tried two places: Cake Tales and Smallcakes Cupcakery and Creamery. Cake Tales’s gimmick was that their batter was chiffon and their butter cream icing homemade. We tried Red Velvet, and while the icing was good, the chiffon cupcakes fell a little flat in that they were too similar to a cake consistency. Smallcakes, on the other hand, delivered BIG! Their cupcake batter was moist and their icing was fabulous. We sampled two: plain chocolate with vanilla icing and a variation of the famous “Hostess” cupcake . Both were out of this world delicious: sweet enough to accomplish its purpose yet not overwhelming in the sugar department. All in all, our depression was lifted. 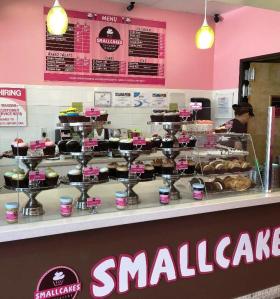 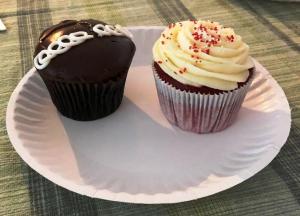 3 Responses to DABBLING IN “D”