It’s time to start the ABC Life, Round Two.  But before we begin, we wanted to revamp our rules. First, we’ve decided on less More and Less – so much less that we are not doing it at all. Second, we are bringing back our points count as it holds us more accountable for getting things done. If not for the ABC Life, we would be doing the same old thing, not branching out, cancelling plans if they took too much effort, etc. Knowing we have to reach a certain point total helps keep us on track even though we are only accountable to ourselves. So here they are:

2 points – for experiencing something new

It could be a new town, new restaurant, new event or activity.

In “Round Two” we are choosing them by theme (addiction, cowardice, friendship, etc.)

We’re also going to try to make a new dessert per month.

1 point – for a learning center addition

We want to expand our knowledge always.

(For two people SO un-crafty, this should probably get us 3 points!)

Now for our first A Activity!

2 Points: Today we decided to explore ARGYLE, Texas. We discovered a small town with not much written about its points of interest – mainly because there is not much there. However, on the road leading to Argyle, we stumbled upon a small Farmer’s Market (a weakness for both of the sisters). With a squeal of tires, we took a sharp turn into the market where we were able to buy some of the ingredients for our A recipes and found some great homemade jams, including bourbon and bacon which we were told tastes great on grilled cheese and hamburgers. We continued on into Argyle where we found a cool little area that included Kimzey’s Coffee set in a hobbit-like cottage. Of course, we had to try an “A” muffin. It was an AVOCADO muffin – a little dense but yummy. 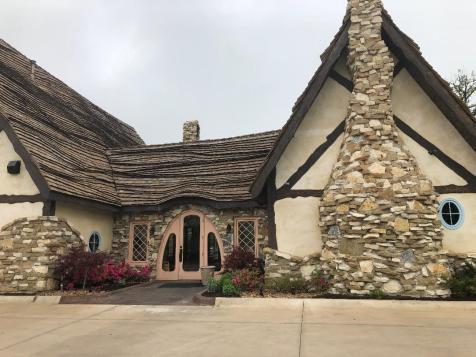 In the same area was Gnome Cones.  Surrounded by dozens of cute little gnomes, this small stand offered ices of various fruit flavors served in a gnome cup. It was a very different gimmick but lacking some flavor in our opinion. 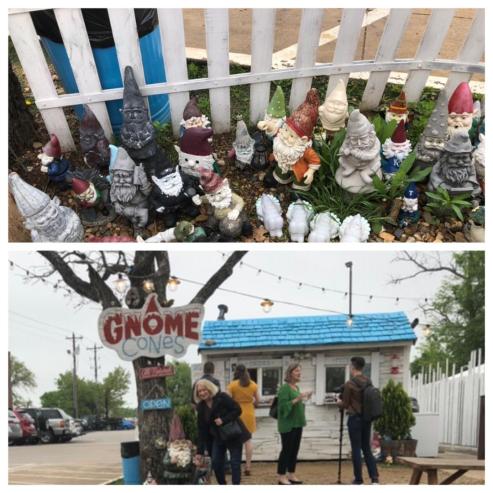 The gnome in the black jacket must have had a growth spurt!