Posted on February 4, 2019 by abcsisters

The thing we really like about the ABC Life is that it gets us out of our routine. If it weren’t for the fact that it was the last day of V month (January), we probably would have shined on our last activity – going to Lewisville on 1/31 to eat at Prohibition Chicken and the Volstead Room.

The National Prohibition Act, also called the Volstead Act, was enacted to carry out the intent of the 18th Amendment, which established prohibition in the United States. The bill was named for Andrew Volstead, Chairman of the House Judiciary Committee, who managed the legislation. Respectable citizens were lured by the romance of illegal speakeasies, so called because of the practice of speaking quietly about such a place in public, or when inside it, so as not to alert the police or neighbors.

When you enter Prohibition Chicken it looks like any other family-style chicken restaurant. But if you know about the Volstead Room, you get the code from the hostess (we had read it was a secret password but she just said to dial zero; maybe she was new), walk through the telephone booth in the back, pick up the old fashioned phone and dial. 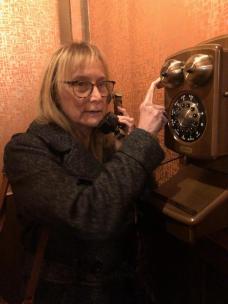 Once you tell the person answering how many in your party (and supposedly give him the password of the day), he buzzes you into the back room “speakeasy.”

Our bartender/waiter, Luke, was wonderful. Extremely friendly, treated us like family and suggested the drink that fit our “flavor profile.” He was dead on. He made something called Pretty in Pink with vodka and raspberries.

Then on to dinner, which was great – from the homemade biscuits to the tri tip to the fried chicken, green beans and slaw. Definitely worth a return trip!

Barbara – More VOLUNTEERING. Having recently retired I am still making the adjustment to going from being a vital contributing member of society to someone who is doing whatever she wants. I know that after 25 years of being a workaholic I am entitled to some more “me time” but we’ve come to associate some of our value with our job. So I’m determined to start exploring volunteer opportunities. They don’t make it easy though. I thought as soon as I said I wanted to volunteer somewhere it would be an immediate thing but I’ve found that a lot of places I was interested in had waiting lists of volunteers. I did find two that would give me the most sense of helping but the application is long and I need a background check. Now I sound like a complainer so I’ll just put my big girl pants on and tackle those…tomorrow.

Less VIAGRA and Cialis commercials. When did we go to 75% commercials for pharmaceuticals? The ones that bug me the most, though, are the various commercials for the drug Viagra and Cialis. I watch very little TV but when I do these are the ads that pop up (no pun intended). I don’t doubt the worth of it for those who are in need but really…how many of us have two matching antique tubs outside? And does every man with E.D. have a gorgeous woman in tow? I’m guessing that the ad makers thought if it showed a good looking man with a plain looking woman the people watching would blame the woman. It’s really a comment on our society.

Laura – More VICHYSSOISE and VITTLES. I have always loved the sound of certain words. They can make me smile, laugh and/or ponder (another word I like the sound of). For V, these two shine and they have the added benefit of being appreciated for what they are as well.  Vichyssoise can be heated but, like revenge, it is a dish best served cold. Vittles, on the other hand, came about because back in the 14th century, most people kept mispronouncing “victuals” as vittles. They both mean the same thing but the latter is easier and nicer sounding.

Less VERIZON commercials. This must be the month that TV commercials are truly getting on both Barbara’s and my nerves. In addition to the annoying commercials Verizon is running lately and their frequency (enough!), my main beef is with the use of Thomas Middleditch (Richard from the series Silicon Valley). Now I don’t mean any ill will toward the actor or his right to earn a living in whatever way he chooses, but having a well recognized actor in those commercials completely takes away from any believability about the premise of the ads. Are we really being asked to believe that a successful actor just believes in Verizon so much that he would use his “free” time to pester people at coffee shops and remote rural areas to sing the virtues of the company?  It just makes me think how phony the whole ad campaign is. Well enough complaining….time for some vittles!

5 Responses to OUR VERY LAST V